Let me start by saying that while I think the American Diabetes Association does some great stuff, I’ve become somewhat reticent to attend their events after participating in a couple of their “Step Out” walks and feeling a little like a red headed step child. I understand that we Type 1’s are a minority in the diabetes world, but we exist. We’re here. So when all of your speakers talk about getting out and getting active so “you too can get off insulin” and other such gems it can be a bit off-putting. I prefer to take an approach of us being in this together; that proper diet and exercise is vital for us all: Type 1, Type 2, or even Type 3! Bearing this in mind, when I received an email from a work acquaintance earlier this year asking for donations to his Tour de Cure page I had to stop and think. On the one hand, here is a fellow PWD getting outside and on to a bike to raise money for a good cause. On the other hand, I tend do give most of my discretionary dollars to Insulindependence (see the button up and to the right? You know you want to click it). So I emailed him back with my solution: while I would not be donating, I would get out there and ride. He graciously accepted and we were set!

Time passed as it is wont to do, and suddenly the date was upon us. True to recent form, I trained hard for the event with approximately zero miles logged on my bike. Where I deviated from recent form was in deciding to opt out of the 63 mile route and go for the more manageable 35 (see? I can learn from my mistakes. Sometimes.). The only issue was that several of our group were going to do the 63, and it started at a different time. The solution? We would all start together regardless of the intended distance. So at 6:30 in the morning I found myself pulling in to the parking lot at the start. Did I mention that it was already over 80 degrees at that hour? But I digress…

After picking up my bib (said bib in a fashionable red for being a “Red Rider”) I met up with the amazing “Team Genesis”. This would be the group I was to ride with and was the brain child of the previously mentioned work acquaintance and his wife. When they made the decision to do this, they really went all out. Not only did they manage to recruit 6 additional riders, but as a team they managed to raise a staggering $5,000 for diabetes. They even got a sponsor to donate custom team jerseys! (Side note: apparently when your team raises that much money, you are provided a tent to use with table, chairs, et al. This is absolutely the way to roll. Strongly recommended.) 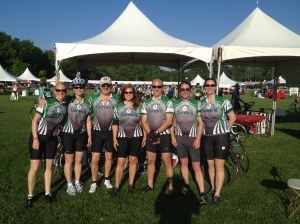 Before we knew it 7:30am had decided to pop over and say hi, so we made our way to the start. As is typical for these sorts of events, a local personality made a brief speech before the start. It should be mentioned at this point that the personality in question (I feel terrible for not having noticed who, exactly, it was) is a Type 1. I bring this up merely to point out the contrast between this event and previous ADA events I’d been a part of. I really felt like this was a much more inclusive environment; that it was really all about the cause. I’m getting preachy, aren’t I? Sorry about that. Suffice it to say the start went over without a hitch and we were off.

I won’t get into detail about the ride itself, except to say that it was very well organized and supported while having a great, scenic route. I also realized along the way that I really miss riding my bike. Back in my triathlon days I would ride at least twice a week, but before the TdC I genuinely couldn’t tell you the last time I went for a ride. I don’t have the passion for it that I have for running, but I truly do enjoy it. An added benefit is that cycling doesn’t beat one’s body up quite so much as running and due to the lower impact I think blood sugar management is easier, too. So while I’m not yet ready to start shaving my legs again, I do think it’s time to get back on the proverbial horse.

All right, I’ve rambled enough. I’ll wrap up by saying that if you get the chance to ride in an ADA Tour de Cure you owe it to yourself to give it a shot. I can’t think of many events I’ve done, especially of that scale, that were as well run, and they really do a great job of recognizing diabetics with their “Red Rider” program (several times I’d pass/be passed out on the course and hear someone say “Way to go, red!”).

I’ve already signed up for next year.