I really should have known better. I did know better, and it still happened.

The other day after work I met up with some friends for a really interesting event in which we learned about off-flavors in beer and how to taste for them (it’s much more interesting than it sounds – really!). Though there really wasn’t much actual consumption of beer, I still had to take a few units to stay in range. Nothing unusual. Afterward I drove over to a friend’s house and we went out for a run. I should point out here that I was in a hurry as I was leaving home, and neglected to re-stock my backpack with Shot Bloks or the like. In 3rd grade English class you learn that’s called “foreshadowing”. Anyway the first mile was quite pleasant, but shortly after that I started to feel… off. Those of you with diabetes probably already know what’s coming next: a glance at the Dexcom showed 68 with two arrows straight down. At this point I was reduced to a walk. We started heading back to my friend’s house, and I actually had to ask her to walk more slowly. By now the Dexcom was showing 59 and still two arrows. Fudge*. I could feel myself swerving a bit as we continue to walk to the house. Words were coming slowly. I found myself trying to explain the physiology of a low just to keep focused. Finally we got to the house and I pulled out my meter:

This can only end in tears…

Now we move to The Third Mistake In This Sequence: remember further up the paragraph when I mentioned being in a rush leaving home? Yeah, right up there. Well it seems I also somehow neglected to ensure I had GlucoLift in my backpack, so there I was staring down a rabid low blood sugar with no glucose. My friend was awesome, and slowly I was able to eat enough oranges, pretzels, and coughcupcakescough to come out of it. In the interest of full disclosure, I did actually overshoot, but the cupcake was so worth it and I corrected quickly. 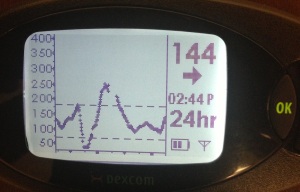 See that nearly vertical down slope?

So why do I bother writing all of this? Well I moved from Multiple Daily Injections to an insulin pump in January 2012. Since that time I’ve run nearly 2,000 miles and I still made a rookie mistake like this. And you know what? I will again. And probably so will you. And that’s okay as long as we learn from it and keep getting out there.

The good news? The weather is amazing today and I’ve got an easy seven miles on tap.

*only I didn’t say fudge…

This entry was posted in Uncategorized and tagged Diabetes, Low Blood Sugar, Running. Bookmark the permalink.