I’m sure many of you have found yourself asking recently, “Huh, I wonder where that runningwithinsulin guy has been?”

The truth is that I’ve been away in the wilderness of Montana. As some of you may know, I have been a volunteer “captain” for Insulindependence for a while. Mostly this has involved leading monthly local events, representing the organization locally, and just spreading the diabetes love. The culmination of the program, though, was mentoring a young diabetic “junior captain” at a week long  trip canoeing the Missouri River in the previously mentioned Montana wilderness. (Note: I feel like saying “Montana wilderness” is redundant. Kind of like Street Road.) 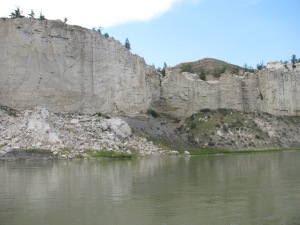 It’s not hyperbole for me to call this a life-changing trip. Spending time completely off the grid learning so much about myself and my own diabetes while watching young people do the same was humbling and inspiring. Oh and I also got to spend more quality time with The Diabetic Camper, so there’s that.

To give some details on the trip itself, the amazing guides from Wilderness Inquiry took care of the details like boats and food, and we spent six days on the river paddling just short of 50 miles. We camped in many of the same places the famed Lewis and Clark expedition camped at, and even read some of the journal entries Captain Lewis wrote from those very spots over two hundred years before. On one of the days we laid over without paddling and took a hike to the Hole In The Wall: 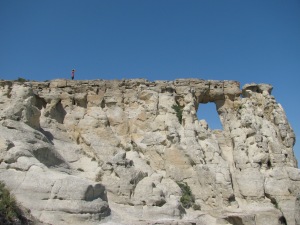 There’s a hole in that there wall!

During the hike we reached a point where the trail went a little, shall we say, vertical. While people were a little nervous, everyone came together and encouraged one another to make it up the small climb. In retrospect, this was the defining moment of the week. The support everyone gave each other and the looks of accomplishment afterward left me nearly moved to tears. Just awesome.

On a more directly diabetes related note, paddling seems to make me insanely insulin sensitive. There were a couple of days there during which I was using less than half my typical total daily dose and eating decidedly NOT low carb. It almost became a running joke between myself and the CDE that was with us that at any given time I was shoveling carbs into my mouth while my basal rate was 70% down. I found this especially interesting given the fact that in daily life I am far from a sedentary person. Maybe I should become a river guide! (note: I am not becoming a river guide)

So that was the trip. Well, actually that was only part of the trip…